HomeEurope Czech Republic PragueWhat to see (and to do) in Prague

What to see (and to do) in Prague

Are you planning to visit Prague? Are you just curious about it for a future trip? Here there are the unmissable things to see and to do in the Czech capital! 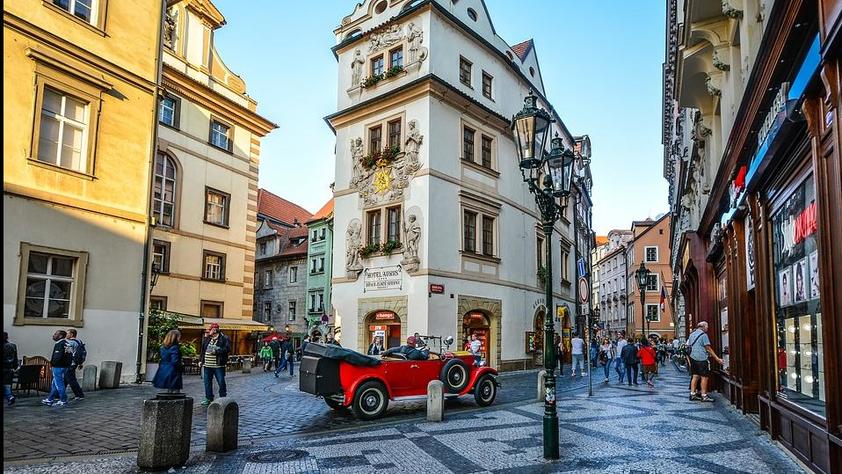 Prague, the old capital of the Kingdom of Bohemia, is a city rich in art, culture, and history. You can wander around its historic center and lost yourself into its gothic and baroque architecture and dream-like landscapes.
You can do it, and we recommend to do it.
But you should also have a sort of orientation to not miss anything of this amazing city.
So we made this list of 10 unmissable things to see (and to do) in Prague!

Even if you are not into castles, you must pay a visit to Prague Castle.
It's simply the largest castle in the world, according to Guinness World Record. Actually, it is technically a "castle complex" occupying an area of almost 70,000 square meters (750,000 square feet), at about 570 meters (1,870 feet) in length.
For these reasons, is protected by UNESCO as a World Heritage Site.
The castle has traditionally been the chair of Czech rulers and is today the official residence of the president. You can enter this complex for free, you can roam around everywhere but some buildings require specific tickets. Here you can book a complete guided tour. 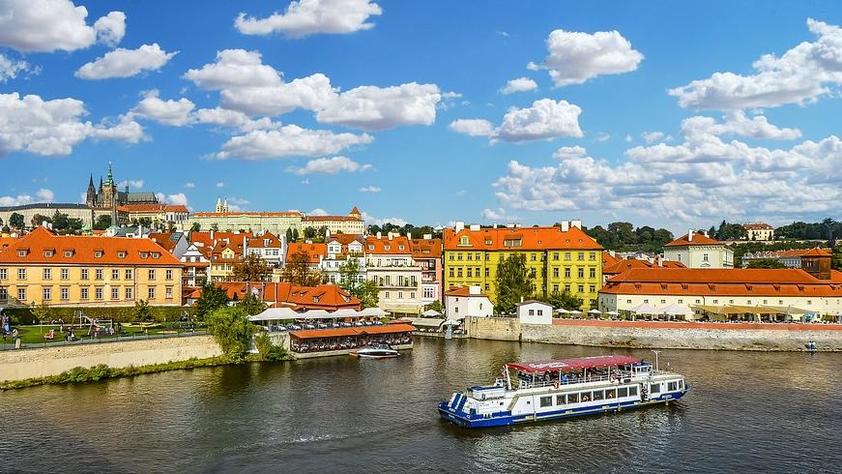 2) Explore Prague from a River Cruise

There are many ways to explore a city. One of the most unique and most exciting at the same time is the river cruise.
Vltava River crosses the historical center, dividing Prague in two.
Admiring the city from the waters is a good way to have a panoramic introduction to Prague and its landmarks. If you never did a river cruise, you must know you have different options. Cruises can include lunch or dinner depending on the time of day you choose to embark. If you go for a cruise with a duration of two hours or more, you will aboard long enough to forget about the hustle and bustle of Prague city center and enjoy the serenity riverbanks on the Vltava river.
You can book in advance here.

If the Prague Castle is the most visited attraction in the city, the most recognizable monument, the true symbol of Prague, is the Astronomical Clock.
The clock was first installed in 1410, making it "just" the third-oldest astronomical clock in the world, but the oldest clock still in function.
It is located in the heart of the city, the charming Old Town Square which keeps alive that ancient vibe itself.
We suggest you roam the square at night: the day crowds can kill the atmosphere, while when the sun goes down there almost anyone here. 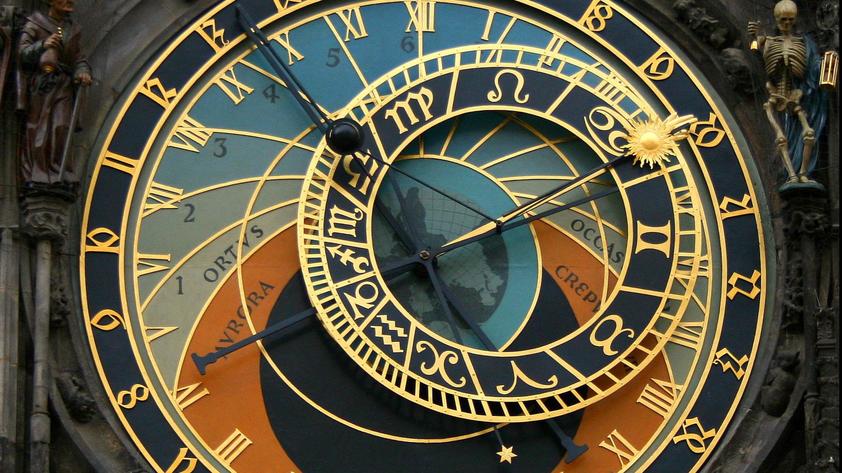 4) Take a walk in Mala Strana

Malá Strana literally means "Little Side", but it has much English translation, and you can read people call it: "Lesser Town", "Lesser Quarter", or "Lesser Side". The fact is simple: the Vltava river did not divide symmetrically Prague and Mala Strana is the smallest part of the city. It was also the newest, and its first name was Nové Město pod Pražským hradem, meaning New Town beneath the Prague Castle. But we are talking about eight centuries ago, so now Mala Strana is part of the historical center and one of the most baroque parts of the city, a charming district you can't miss no matter what.
Once there, you should pay a visit to the Infant Jesus of Prague (also known as the Child of Prague): a little statue of Jesus Christ as an infant; legends claim that the statue once belonged to Saint Teresa of Ávila. Millions of visitors every year come to this shrine to pray, bow and make wishes hoping that they will come true.

One of the buildings in the Prague Castle Complex you can't miss is the St. Vitus Cathedral.  Even if it officially consecrated only in 1929, the history of this building traces back to one thousand years!
What now is a Roman Catholic church, has lived many lives during the last millennium. It was first pagan, then Christian and, for a considerable amount of time, the Cathedral was both: split between two different religions.
It's aesthetically mesmerizing, the archetypal gothic church you see when you close your eyes. Observing it up close is really a thing. 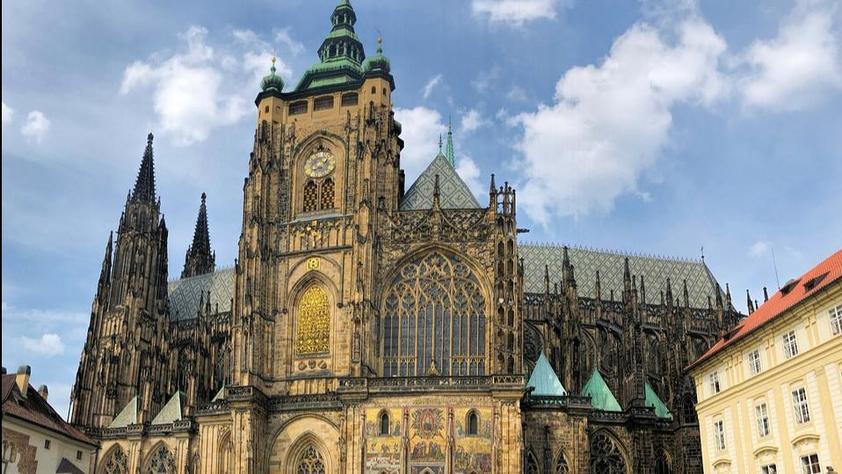 6) Roam around the Jewish Ghetto

The Jewish district, also known as Josefov, it is situated right between the Old Town and the Vltava River. It has a long history that traces back to the 13th century when Jews living in Prague were ordered to leave their homes and establish themselves in this area, the so-called "ghetto".
The Jews were forbidden from living anywhere else in the city and other exiled Jews from different European countries came to live here. On top of all this, a lot of buildings in the area were demolished in the late 19th century when the cities layout was redesigned. Luckily, many important historical buildings did survive, including 6 synagogues and are well worth a visit.

7) Try the best beer around

Yes, the art, the history, the architecture, the culture and so on...
But let's not pretend we all know (and love) Prague for another thing too: beer!
The Czechs declare they make the best beer in the world and Prague is the right place to see if it's true!
You will find a huge variety of bars where try famous Czech lagers such as Budvar and Staropramen, together with craft beers from the many independent microbreweries in the country. Most Czech beers are light beers, brewed naturally from hand-picked hops. 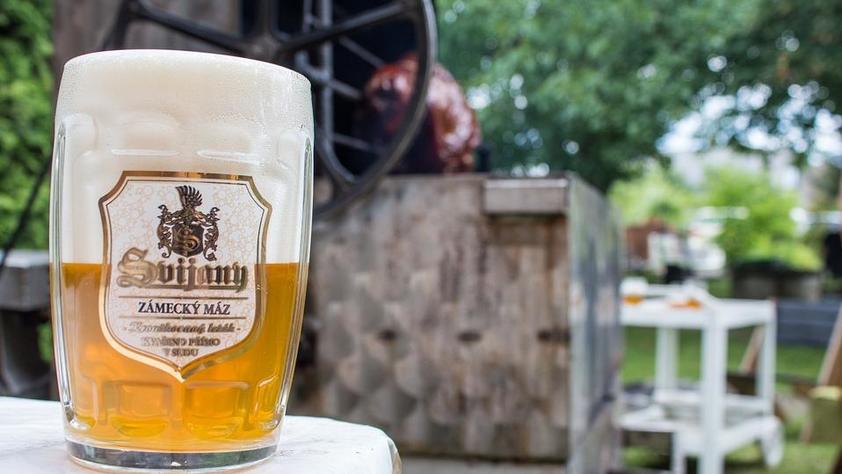 8) Do an excursion to Karlovy Vary

All right, this is not a thing to do in Prague but a thing you SHOULD do once you are here. We all have the (bad) habit to stay all the holiday in the same place, especially visiting a historical city, while there is a lot of interesting excursions to do.
Located just two hours away from Prague, Karlovy Vary is a historical town known all around the world for its dreamy hot springs. The Karlovy Vary hot springs are a historical attraction themselves, being the most famous hot springs in Europe in the past to the point that even Johann Wolfgang von Goethe and the Russian Tsars did come here to spend some relaxing time.
If this kind of personalities used to love this place, there should be a reason. Find it out booking this tour!

9) Taste Goulash and other specialties

Like for beers, we suggest you to take your time and try the local cuisine.
Czech cuisine has a lot of spicy and tasty meat-based traditional dish.
The most famous among them is, of course, the Goulash: a central Europe timeless classic, made in a different way in every region.
Other delicacies you should try are Svíčková na smetaně (Marinated sirloin), the Vepřo-knedlo-zelo (Roast pork with dumplings and sauerkraut) and the kolach, their traditional kind of pastry. 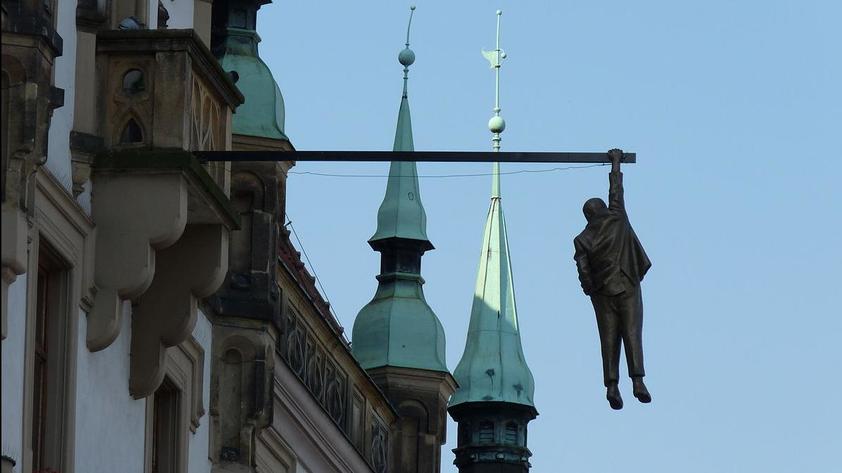 We want to leave you with a quest: spot Sigmund Freud! One of the craziest art in Prague is the one you see above: a seven feet tall statue of the father of psychoanalysis, hanging by a hand, maybe pondering whether to hold on or let go.
We can tell you only that it is located in Old Town, or Stare Mesto, as Prague people call it.
Finding him is up to you!