HomeEuropeItalyFlorenceThe most famous corridor in the world will open again

The most famous corridor in the world will open again

Can a corridor be "famous"? And if we tell you that this corridor is about one kilometer long and it passes by every iconic landmark of Florence, places like the Uffizi Gallery, Palazzo Vecchio, Ponte Vecchio, Boboli Garden, and Pitti Palace. 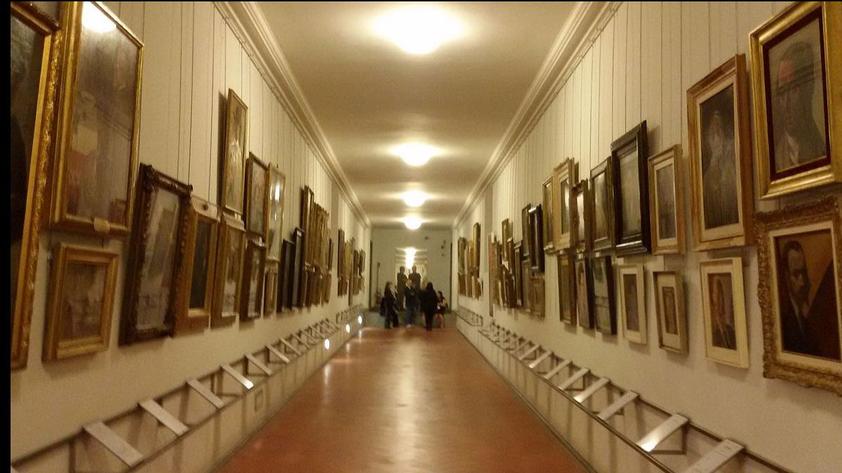 We are talking about the Vasari Corridor: an architectural miracle that tells the story of Renaissance Florence, showing how the political power used to rule at the time.
This masterpiece was closed to the general public since its construction. Over the years, it became only accessible over to special visits, like foreign politicians, presidents, and then to organized groups with “special” permissions until it was totally closed in 2016 for security reasons.

But what was the Vasari Corridor and why they built it?
Let's find it out!

The longest "secret passageway" ever built

A good way to call it would be the largest secret passageway ever built.
The Corridor is called Vasari after the name of its architect, Giorgio Vasari, one of the most polyhedral Renaissance personalities: he was a painter, a sculptor, an architect still he most famous today because he wrote "Lives of the Most Excellent Painters, Sculptors, and Architects" a book regarded as the origin of art-historical writing. This character "larger-than-life" was put in charge of the corridor by another larger-than-life man: Cosimo de Medici.  Cosimo de Medici was the first Grand Duke of Tuscany, a prominent figure in the development of that artistic movement we know as Italian Renaissance, the most powerful man in Florence and one of the most powerful in the whole country as well.
Officially, in 1565 he commissioned the construction to celebrate the wedding of his son Francesco I with Joanna of Austria. The passageway commenced in March 1565, was finished in just 5 months on time for the wedding celebrated on December 16th.
But it was not just a wedding gift. The Vasari Corridor put in direct (and repaired) communication the Pitti Palace, the personal residence of Medici Family, to Palazzo Vecchio, the town hall, the seat of the government.
In this way, Cosimo had its workplace connected with its home with a fast-track, secret passageway: the most powerful man alive in the city had many enemies and chose to take countermeasures. 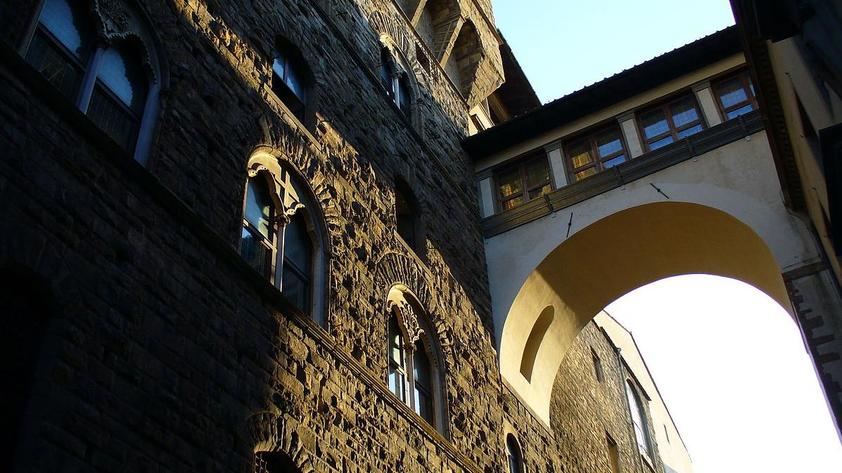 Of course, the secret passageway of a ruler it wasn't "just" a secret passageway. It was a museum on its own, many masterpieces were hanging on its walls and the windows did offer some suggestive views over the city.
One anecdote shows us the power of Cosimo and, at the same time, serves as a backstory for the famous traditional jewelry shops you will find on Ponte Vecchio.
In the past, there was a market on Ponte Vecchio but was a meat market. The Vasari Corridor, as we said, pass over the bridge and Cosimo could not stand the smell of meat every day, on his way to work. So he decided to move the butcher shop away and put there the jewelry shop instead: the gold was the right view for a man like him.

Other powerful men walked the corridor in the past centuries and often not the best ones you can think of. Benito Mussolini did welcome Adolf Hitler using the Vasari Corridor to impress him with the "best-kept-secret" of Italian Renaissaince.
Some say that, ten years after, when Nazi destroyed every bridge in Florence except Ponte Vecchio, it was a direct order from Hitler because he loved its interiors (the Vasari Corridor) too much.
Too bad for him: the Antifascist Italian resistance movement used the Vasari Corridor many times to cross the Arno River and surprise nazi-fascist troops.
After the war, as we said, very few people had the privilege to cross the corridor from one extremity to the other, but now the situation is going to change. 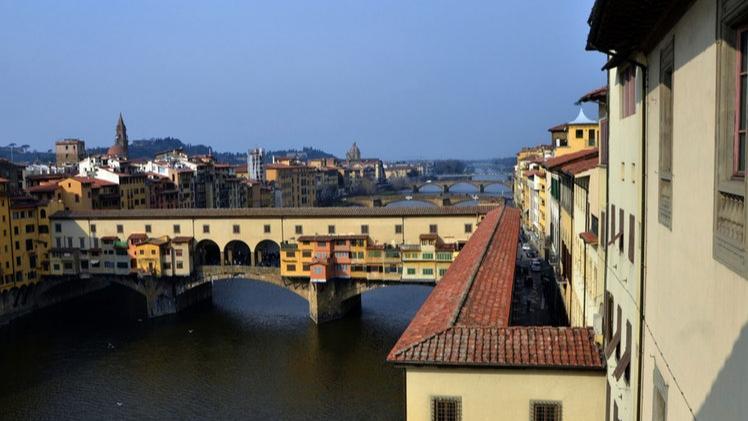 The new life for the Vasari Corridor

The director Eike Schmidt of the Gallerie degli Uffizi, announced the 10 million euro project to reopen the Corridor in 2021 to the general public.
This huge amount of money, coming from both local and European funds, will serve to do structural restorations of the interiors, which have not been done for several years. The interiors get a fresh layer of paint and, more importantly, the floor will be completely removed and remounted in antique terracotta. Security exits and access for disabled people will be open along the corridor.

Moreover, the interiors as a concept will change: over 700 paintings of self-portraits the Corridor housed over the past decades will be move to the first floor of the Uffizi Gallery. This is because the Corridor is intended to be primarily a panoramic path and the light coming from open windows would damage the paintings.
Anyway, around thirty ancient sculptures and a collection of Greek and Roman style (in the museum’s deposits since the 1800s) will remain to decorate the Corridor, with a location dedicated to the 16th-century frescoes by Giorgio Vasari that decorate the exterior walls of the Corridor along Ponte Vecchio. It was removed at the end of the 1800s, restored in the 1960s and only shown in temporary exhibits to come back to the museum’s deposits, where it is today. 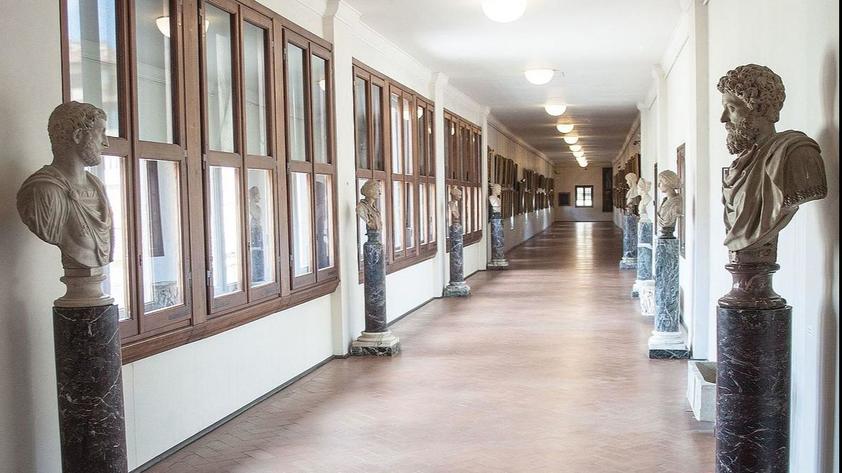 How does the Vasari Corridor will work?

Due to its delicate nature and in order to ensure the safety of everyone inside, the Vasari Corridor cannot welcome too many people at the same time: the maximum capacity will be 125 visitors at any time and they must enter the corridor from the Uffizi. Then the visitors can decide whether to go out the Boboli Gardens or continue on to the inside of the Palazzo Pitti, arriving near the Palatine Gallery.
45 euro will be the cost of the ticket to visit the Vasari Corridor in the high season; 20 euro in the low season.
They expect around 500,000 people to visit every year once it reopens and the 10 million euros spent to restore the corridor will be recuperated in just one year!

This wonderful Corridor will open during Autumn 2021, a long way to go!
Anyway, today you can easily walk along the so-called Medici Mile... just from outside!
Try this walking tour, follow our qualified guide and discover the heart of Renaissance Florence!