HomeEuropeItalyNaplesWhat to see in Herculaneum

What to see in Herculaneum

You know you have to visit Herculaneum, as well as Pompeii, if you come to Naples. But you know what you should look at? We are here to help! 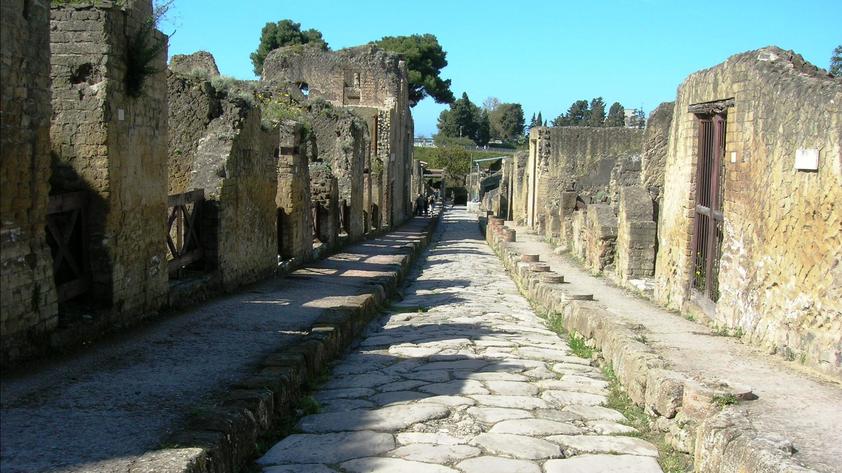 After the deadly eruption of Mount Vesuvius in 79 AD, Pompeii and Herculaneum were submerged by pyroclastic materials such as molten rock, pulverized pumice, and hot ash. For this reason, they are the best-preserved ancient cities in the world.
Unlike Pompeii, the pyroclastic material that covered Herculaneum carbonized and thereby protected the wood in objects such as roofs, beds, and doors as well as other organic-based materials such as food.

The vast majority of vestiges are located in a small area near the Corso Resina (once called Decumano Massimo, meaning: Main Road), the Herculaneum Archeological Site.
A couple of must-sees are outside the site, so we will cover both areas.

What to see in Herculaneum Archeological Site

1) Explore all the ancient Spas

Herculaneum was a kind of holiday resort for ancient Romans and it had two different SPA center: the Suburban Spa, located in the south-west of the area, and the Urban Spa, in the north.
The latter one is split between Female Spa and Male Spa.
They are one of the best-preserved Roman bath systems in the world, with deep pools, stucco friezes and bas-reliefs looking down upon marble seats and floors. Here you will also able to examine the soaring volcanic deposits that choked the ancient coastline. 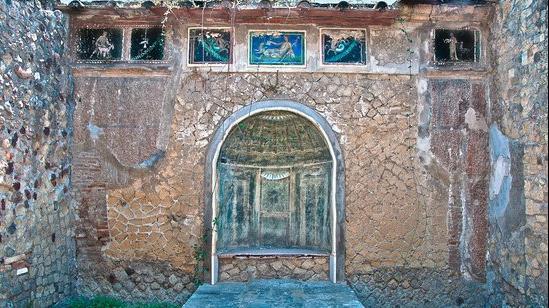 Most houses and villas around here have these suggestive names. In fact, they are literal descriptions of what archeologists found there.
Here they found a complete human skeleton.
But it is worth a visit because features five styles of mosaic flooring, and even a system of white arrows at the main door to guide the most confused of guests. In the internal courtyard, look up to the skylight, comprehensive of the remains of an ancient security grill.

The name of this aristocratic residence comes from the amazing mosaic in the triclinium (the Romans' dining room), which also shows a mosaic-encrusted nymphaeum (a fountain used as a shrine to the water nymph). You will admire Neptune, the god of the sea, and his wife, Amphitrite, depicted in warm colors and you can't help but imagine how lavish the original interior must have looked like. 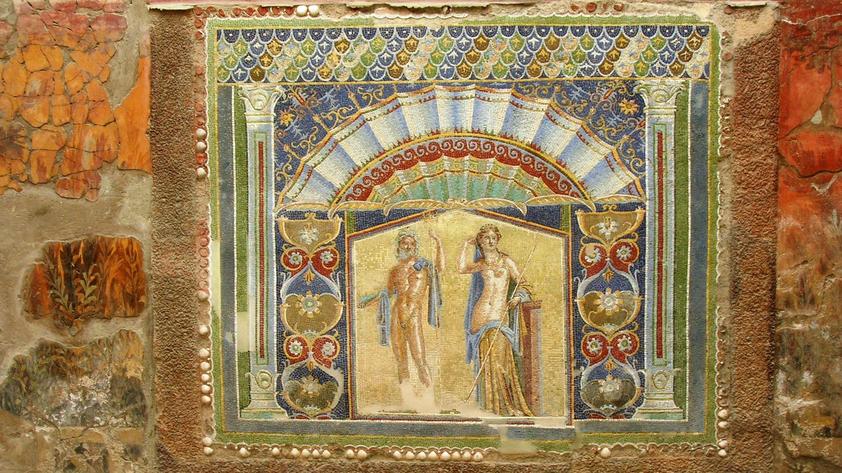 Then you have Casa dei Cervi: a monumental example of how a Roman noble family's house looked like. Before the volcanic mudslide hit, the villa boasted a seafront address.
The residence is around a central courtyard, it has two stores and the walls are decorated with murals and some beautiful still-life paintings. Outside, in the courtyard, you will wind a little pair of marble deer attacked by dogs, and a lovely statue of a drunken, peeing Hercules. 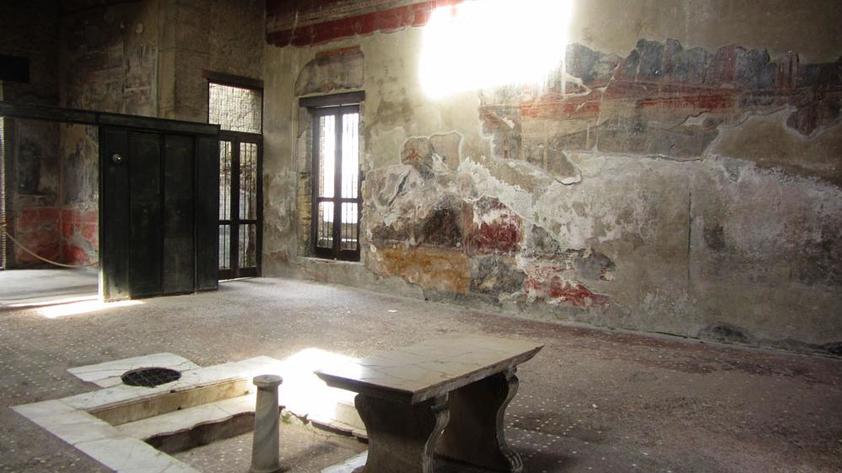 This house is unique because it involves two atria, which likely belonged to two separate homes that were merged in the 1st century AD. The most remarkable monument here is a wonderfully well-preserved wooden screen, dividing the atrium from the tablinum, where the owner talked business with his clients.
On the other room, on the left side, you will find the remains of an ancient bed.

What to see outside the Archeological Site 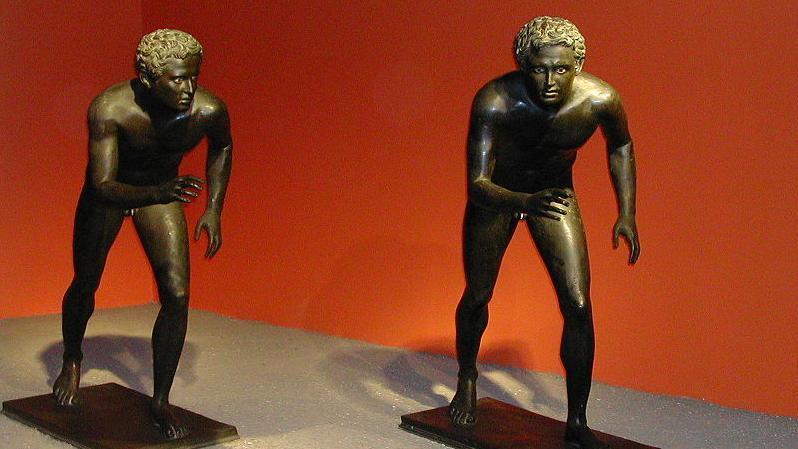 Just a few steps away from the proper archeological site, you will find Villa dei Papiri: simply the most luxurious villa in Herculaneum. It was owned by Lucius Calpurnius Piso Caesoninus, Julius Caesar's father-in-law, it has four stories and its 245 meters long complex did stretch down to the sea. The noble Romans who owned the place did enjoy their swimming pools, fountains and a collection of up to eighty sculptures.
The name archeologists gave to this villa came from the library, which included over 1800 papyrus scrolls. Most of them are now kept in Naples' Museo Archeologico Nazionale.

2) Do an underground tour of Herculaneum Ancient Theatre

One of the first discoveries at Herculaneum was its theatre, first found in 1709 whilst digging a well. The plan and elevation confirm that it was of a standard Roman design, complying very much with the definitions specified by Vitruvius in his Ten Books on Architecture.
In the past, it was one of the unmissable stops of a Grand Tour, the Italy trip intellectuals like Goethe and Stendhal used to do.
Due to safety reasons, the Herculaneum Ancient Theatre remained closed for over 20 years until... last March!
On March 17, 2019, they reopened to Theatre to the general public and you can do a fully-guided underground tour of this ancient wonder. Something you should not miss. 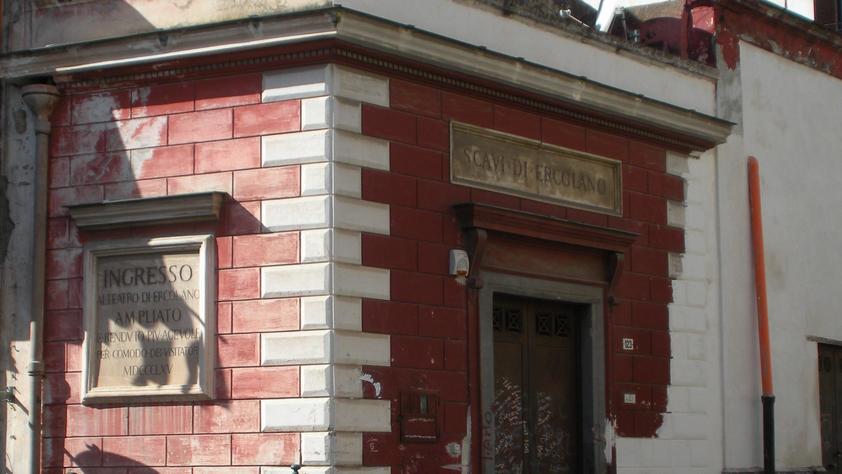 This wonderful palace does not come from Ancient Rome, but it's not a reason to not enjoy its beauty.
Charles III of Bourbon built it between 1738 and 1742 and it was full of archaeological treasures, excavated on-site as well as at nearby Herculaneum and Pompeii: king’s booty. Most of these gems have been transferred to the Museo Archeologico Nazionale in Naples since years, yet the on-site Herculanense Museum offers a captivating insight into the original Bourbon-era excavations, the first to shed light on the ruins and what they did mean for 18th-century people.
Surrounding the palace, there is the 19th-century Orto Botanico, a sophisticated concoction of wide avenues, woods and landscaped gardens planted with species from all across the world. The garden also hosts the Università degli Studi di Napoli Federico II's Faculty of Agriculture.