HomeEuropeItalyRomeEverything there is to know about St. Peter's Basilica

Everything there is to know about St. Peter's Basilica

Learn more about the most important church in the world: St Peter's Basilica. Discover the history, the architecture, and more.

What do Catholic architects have in common? Aside from their instrumental building and shares Italian heritage, all Catholic architects are inspired by one structure, the St. Peter’s Basilica.
To understand more about the Catholic history, first you need to understand, the St. Peter’s Basilica, the history of the building and the information available about the chair of Saint Peter among other things.

The history of the St Peter’s Basilica 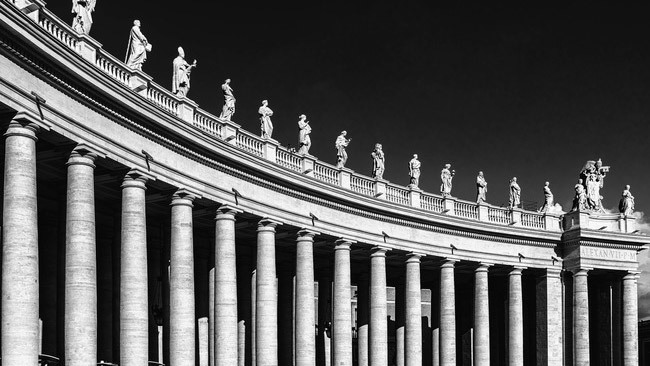 The structure is the ultimate symbol of the Catholic Church worldwide. With its history stretching back to 2,000 years, the structure is fascinating for architects and other people who love adventure worldwide. Being one of the iconic and impressive buildings in Rome, the massive structure was built in 1440’s and 1450’ under the surveillance of the Pope Nicholas V.

However, the structure you see today is not the original St Peter’s Cathedral built many years before. The original basilica was built by Emperor Constantine in the fourth century. He was the first Christian emperor Of the Roman Empire. The second Cathedral, which is the current St Peter's Basilica was built on the same spot where the original church was. To build the current Basilica, it took the efforts of people like Pope Julius II, to make the necessary decision of tearing down the old church and building a new one on the same spot.

The result? Most ancient art and pieces were destroyed when the old basilica was brought down. From statues to mosaics all were destroyed. The new Basilica, which was build staring 1506 to 1626 become the “masterpiece of a Renaissance architecture.”

The early years of the church were plugged with many misunderstanding and misfortunes. After the original building which was built in 3000’s A.D., Nicholas V decided to tear it down and build the modern structure. The early plans began in 1452 under the watchful eyes of architect Bernardo Rosselino. Unfortunately, both of them died before the construction work began. 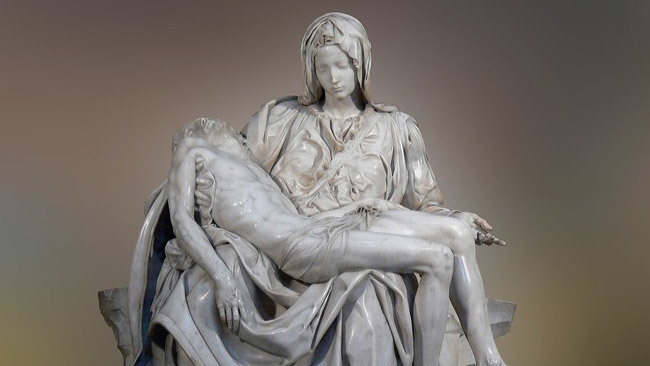 Later, Da Sangallo died, and Michelangelo Buonarroti took over as the chief architect. Michelangelo oversaw the construction until 1564. During this time, he was responsible for designs and one of the famous structures he designed was a massive dome, which was known by many as the Michelangelo's Pietà. When measured from the floor to the ceiling, the pieta reaches over 445 ft.

The Michelangelo's Pietà is a famous masterpiece that depicts what most Catholic see as Virgin Mary that is holding Jesus body. The Pieta is made using the Carrara Marble. It is sculpted in a way that makes it smooth. What most people don’t know is the Pieta is protected using a bulletproof glass. Michelangelo died when he was 89. By this time, The Michelangelo's Pietà was almost finished, but it took Giacomo Della Porta another 16 years to finish the dome. 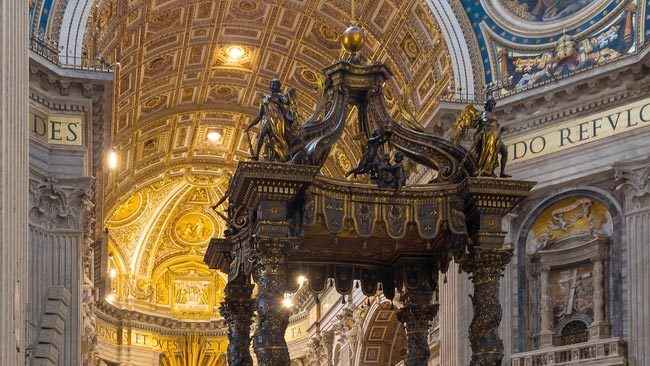 At the center of St Peter’s Basilica is the St. Peter’s Baldachin which was designed by Bernini. This piece of artwork was designed during the Baroque era after the basilica was finished, but looked like something was missing. Between Michelangelo's Pietà and the main body of the structure, the place looked naked and formless. So Bernini came up with the gigantic idea of St Peter’s baldachin. Bernini had to slim the shapes and raise the gaze precisely on the spot.

The baldachin was designed and placed above what is considered Saint Peter's tomb. The Baldacchino measure 96 feet tall. It is a solid, bronze, four-poster canopy that is placed over the main altar. Although it appears dwarfed by the Michelangelo's Pietà, it is almost comparable to 10 storey building. It uses at least 100,000 pounds of bronze. 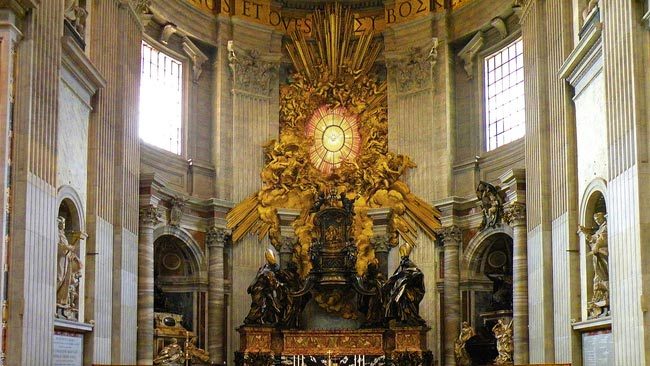 The Chair of Saint Peter is a physical object named as the Cahir of St. Peter. The chair is found at the back of the St Peter’s Basilica. Depending on what you mean, the chair can be an ancient ornamented chair housed in the St Peter’s basilica apse. Others believe that the chair represents a spiritual authority. Here is how they come to the conclusion.

As a physical object, the Chair of Saint Peter is behind the famous alter, near the back wall and below the well know glass image of spirit as a dove. However, something that represents spiritual author the chair is seen as a symbol of Peter special mission and his successor who tended to the flock and kept it united in

Also known as the Throng of Saint Peter, this wooden throne was a gift to Pope John VIII by Charles the Bald, and Holy Roman-Emperor. Today, Catholic faithful celebrate a feast of the Cathedralon fee 22nd of every year. The recurrence honors the primary authority of St Peter. It dates back to the 4th century. The chair is kept as a solemnity dedicated to the prince of the church.

St Peter’s Basilica can fit up to 22,000 faithful at one time, the structure is over 190 feet wide and 6000 feet long, which makes it equivalent to two football fields. The nave of the church is 150 feet high and the altar approximately 95 feet tall. Despite it being a humongous structure, it is the second largest in the whole world, the largest is the Our Lady of Peace, which is located in Ivory Coast. Our Lady of Peace was finished in 1989.

The St Peter’s Basilica has other historical information and associations with the papacy, early Christian church, the Catholic counter-reformation and protestant reformation among other things. The church highlights the city of Rome. It is used for more than five church services each Sunday. It’s hard to argue that this structure is an amazing piece of architecture and art. Historians believe the church was built upon Saint Peter remains, but there is any evidence. Some claim Peter’s body was found wrapped in purple linen, but there is no solid evidence. Of course, there is much you can learn from this massive church.