Do you know the history of the most famous, iconic and bizarre red-light district in the world? Discover the truth behind the legendary De Wallen of Amsterdam! 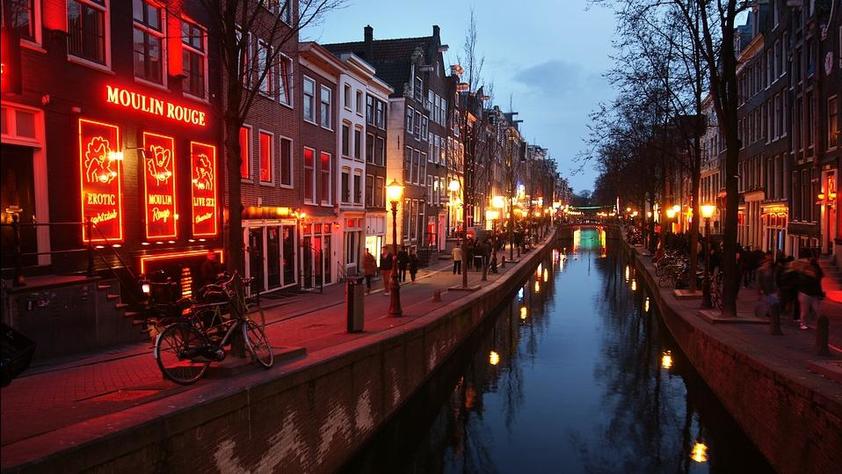 Amsterdam is a wonderful city often called "Venice in the North" for its canal structure and bearing a glorious past of maritime trades and adventures. But for many tourists it is also a  "sin city", being a place where you can legally smoke weed and go with sex workers.
The prostitution, in particular, became a real tourist attraction not just for the ones who want to have pay sex, but for everyone who wants to visit the strangest, bizarre and colorful red-light district in the world: De Wallen.
Either you went there or not, you already know how it looks: the series of red-light windows on the canalside is the imagine all the world has of De Wallen and the reason why it is so characteristic.
But do you know its complex and unique history? Let's find it out together!

De Wallen, means "The walls", and is an ancient name for this district, referring to a time when the area, being the center of Amsterdam, was a walled citadel.
The district was also near the port and with a port come sailors and money which often lead to cathouses and women. So, as far as we know, since the thirteen century, De Wallen was familiar with prostitution.
But being also the core of the city, you will find many religious and institutional buildings in the area: at the time it wasn't a "ghetto", but the actual Amsterdam! The oldest church of the city, supposedly the oldest building in general, is called Oude Kerk and it is right here! So the prostitution was here since the middle age. But the area did not look like as the Amsterdam
Red Light District with the iconic windows: just simple cathouses and street prostitutes. The story is way longer and complex. 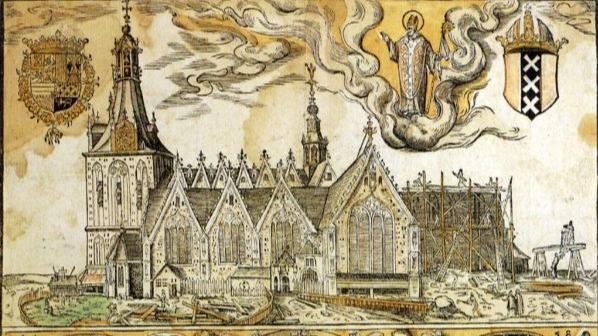 The first ban during the Dutch Revolt

It was during the Dutch Revolt, the revolt of the northern, largely Protestant Seven Provinces against the rule of the Roman Catholic Habsburg King Philip II of Spain, that prostitution became an issue. The Revolt was a "clash of cultures" lasted for 80 years but was in 1578,
where Amsterdam became Protestant, that new law made fornication deemed punishable.
Sex workers were banned and many of them went underground. Usually, they end up working for a "madam" who gave room and board, protection and advice.  Madam and girls used to go out during the nights, roaming pubs and inns to pick up clients. Brothels were illegal but tolerated if kept hidden. 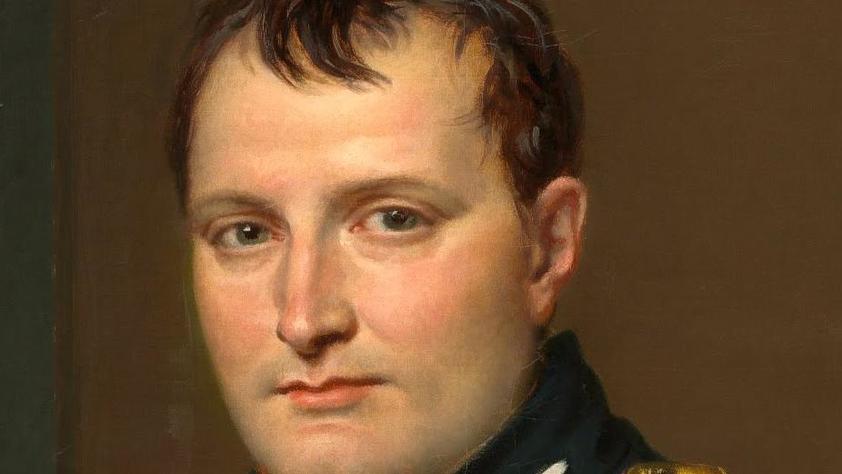 The revolution under the Napoleon Rule

You may have forgotten this, but Holland was under French rule during the Napoleon era.
In 1811 the ban on prostitution was removed: only the happiness and of its soldiers did matter to Napoleon and, during this period, French soldiers were the main customers of prostitutes in De Wallen.
Happiness includes health, of course, and it was introduced a law that made obligatory health checks for sex workers, to protect soldiers from STDs. A sex worker who passed the test received a red card and could continue to work. The Napoleon "Red Card" system was one of the earliest preventive healthcare programs for sex workers ever made. 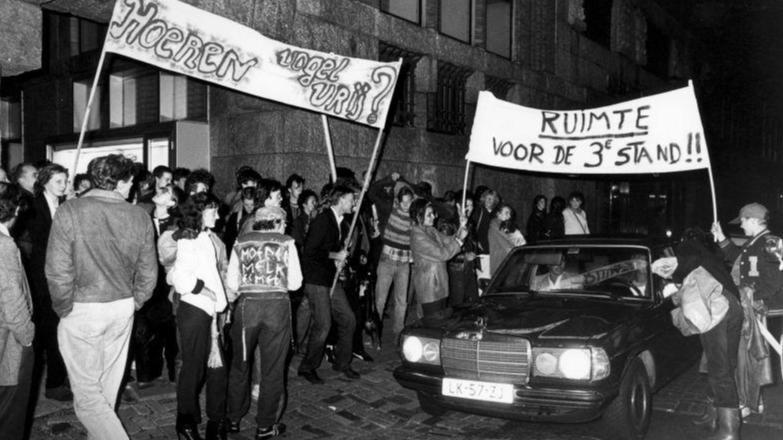 From the Victorian Era to the Red Light Windows

After the end of Napoleon, all Europe faced a conservative turn on both politics and morals, and many associations start to fight prostitution. At the beginning of the 20th century, they succeed to pass an abolitionist law and Prostitution in Holland go underground again. Sex workers come back to look for clients in pubs, bars or in the streets... standing before their doorway.
This very picturesque way of luring clients from their door was too blatant and began to be criminalized during the 30s. So what sex workers did? They use the window!
Yes, the famous Red Light district windows do not come from a shop-window analogy but from literally-house windows!
The red light was added because even being exposed in plain sight from a first-floor window wasn't tolerated, so sex-workers half-closed the curtains and use a strong, red-colored lamp as a sign toward the clients. 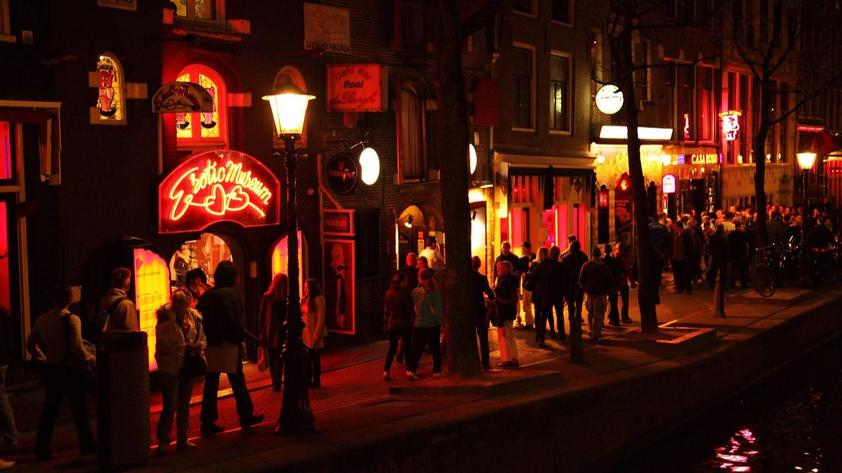 The legalization of prostitution in Holland and present time issues

After the sexual revolution of the 70s, the movement for the legalization of prostitution gained momentum.
The Red Thread, an advocacy association for prostitutes, was founded in 1985 and started to work legitimization and against the stigmatization of prostitutes.
They won this battle and, in January 1988, was defined as legal work in Holland.
Nevertheless, it's not simple to make coherent legislation about sex work and it took until 1 October 2000 to become fully legal and licensed businesses. Since then, sex workers can work as regular employees, though the vast majority work as independent contractors. The FNV, a major federation of unions in Holland, began to accept prostitutes as members during that period.

In the last twenty years, the Red-Light District growth as a notorious tourist attraction in Amsterdam. Being in the very heart of the city, located in a charming and picturesque setting on the canalside, it is the most bizarre and fascinating red-light district in the world. The contradiction between common people living their everyday life, ancient churches from the middle age and sex workers smilings behind the windows is a strange show that attracts everyone, and most of the tourists don't go there to actually buy sex.

Opinions about the Red-Light District in Amsterdam may vary. Political parties, organizations, and unions in Amsterdam often hold strong views about sex work in Amsterdam. The business involves negative aspects, such as the connections with organized crime (which are still in place even if the legalization was intended as a way to end them), the psychological and physical health of sex workers and their actual free will to enter this job, when they come from developing countries or low classes and do not have many opportunities.